If you've stopped by the blog over the past week or so, you noticed that it looked like someone dropped and broke it, and then couldn't figure out how to put it back together. That's not far from what actually happened. So until the old look gets sorted out, we've gone back to basics so I can keep posting, and you can keep reading without eye strain.  And at some point (I hope) we'll be back to normal. Until then, let's take a moment to celebrate two of the many wonderful people we've lost over the past week.

In a 1964 episode of The Fugitive called “Man On a Spring,” Richard Kimble walks into a tavern, suitcase in hand as always, and on the television behind the bar is a Los Angeles Dodgers game being called by Vin Scully.

Scully was then in his 14th year as the Dodgers announcer, and he was just getting started. By the time he retired in 2016 he had spent 67 years in that vocation, a remarkable rarity in not just having the same job, but also to consistently perform it at the highest possible level. Perhaps his cadence did slow a bit in the last couple of years, but fans that tuned in and heard his familiar, reassuring voice still knew that for the next three hours they were in good hands. For baseball lovers, this was Comfort TV. 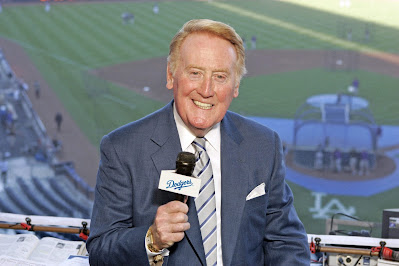 His eloquence as a storyteller was unmatched - he could recall moments from games he called decades earlier; he could slide in anecdotes from history or philosophy or popular culture - all without a script, and never miss a pitch call. There's a reason why fans would bring a radio to Dodger Stadium so they could still listen to Scully call the game they watched from the seats.

If he had a signature call (outside of Sandy Koufax’s perfect game, which happened before most of us were old enough to listen), it would be of a hobbled Kirk Gibson’s game-winning home run in the 1988 World Series. In this unforgettable moment he said nothing while Gibson rounded the bases, letting the pictures speak for themselves. Only as the celebration began did he lend his trademark extemporaneous brilliance to the occasion: “In a year that has been so improbable, the impossible just happened.”

But this call was my favorite – short and sweet.

The big moments didn’t need his help - it was the little moments, the dull moments (frequent in baseball), in which Scully could hold a viewer’s interest like few other broadcasters before or since. His was an old school professionalism that is seemingly lost now, in a world in which calling attention to yourself is the path to more Instagram followers and that’s all that matters.

Which brings us to Nichelle Nichols. Yes, there is a parallel.

Obits and tributes described her as a trailblazer, which she surely was. What none of them said was how she blazed that trail, the credit for which belongs both to her and to Star Trek creator Gene Roddenberry. 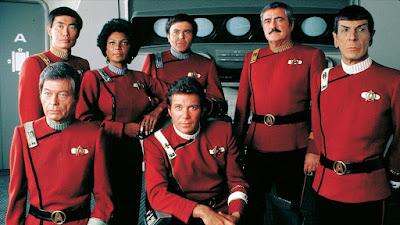 When viewers first met Lt. Nyota Uhura she was exactly where we’d become accustomed to seeing her – as a communications officer on the bridge of the Starship Enterprise, serving in a position of authority and often playing a critical role in the success of its missions.

The fact that the character was black likely did get some media attention at the time, but it was never emphasized on the show. Calling attention to it seemed silly, as the whole point of the series was to show how humanity had evolved in the era of interstellar travel.

In three seasons she was rarely a focal point of any episode. Sometimes she only had a handful of lines (“Hailing frequencies open”), and sometimes she didn’t have any. But her mere presence remained powerful, which is why Dr. Martin Luther King urged her to stick with the low-rated series despite her limited screen time.

And when she got something interesting to do, as in the alternate universe episode “Mirror, Mirror,” she was unforgettable. 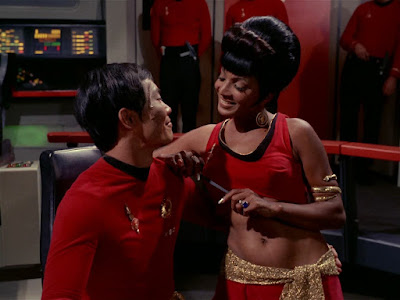 Lt. Uhura was a member of an elite crew on the flagship of the Starfleet armada. That alone commanded respect and admiration. We’ll never know how many young women – not all of them African-American – she inspired to dream bigger.

You don’t have to call attention to yourself to make an impact. Sometimes – most of the time – just doing your job well is more than enough.

Posted by David Hofstede at 9:36 PM