In the compendium of classic TV tropes, a courtroom episode is right up there with amnesia and visits from eccentric relatives. In fact it's actually more difficult to find shows that never featured a character standing before a judge. So let's delve into the docket once more for three memorable visits to Comfort TV Court.

Star Trek: The Next Generation

From season two, “The Measure of a Man” is almost universally regarded as the moment this series first achieved greatness. It had been very good before that (“The Big Goodbye,” “Datalore”), but here was an episode that would rival the best entries from every Star Trek franchise.

The story: robotics expert Bruce Maddox wants to dismantle and study Data, with the hope of replicating the technology that created him. Data doesn’t believe the expert is up to the task, and Captain Picard does not want to lose a fine bridge officer.  But Maddox claims Data is the property of Starfleet, and doesn’t have the right to refuse his orders, any more than a starship gets to decide where it wants to go.

The conflict is resolved at a makeshift trial, with Picard arguing Data’s case, and (because of a technicality dictated by the circumstances) Commander Riker heading up the prosecution. 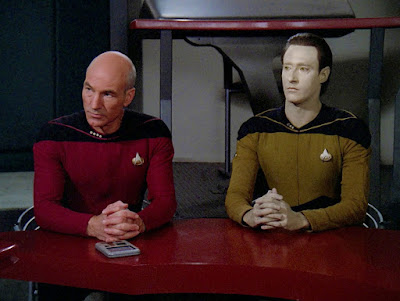 The brilliant Melinda Snodgrass script delves into opposing ideas regarding sentience, ethics, and self-determination, and even sort of acknowledges the possibility of individuals having souls, a rare departure from a series with a stubbornly humanist perspective.

Who’s That Judge?
Amanda McBroom is best known as a singer-songwriter whose shows always sell out at New York cabarets, but she’s also wonderful here as JAG Captain Phillipa Louvois. 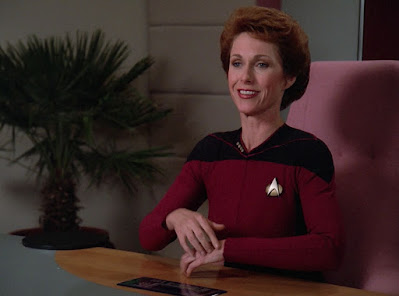 Her antagonism with Picard dates from a previous judicial run-in, and she clearly delights in taking the supercilious Captain down a peg or two. But there is clearly mutual respect there as well.

The Facts of Life

In “The Rich Aren’t Different,” Jo borrows Blair’s watch (without asking) and breaks it during a basketball game. “At least it’s no great loss,” she tells her. “How many watches do you have? 20? 30?” That cavalier attitude toward the matter angers Blair enough to take her to small claims court.

Usually if there’s a lesson to be learned from their clashes, it’s Blair whose spoiled outlook needs adjusting. But here it’s Jo who comes to the realization that her actions were insensitive, regardless of how easily Blair could afford to replace the broken watch: “Okay, I’m rich. But my things still deserve respect.”

As with so many Facts of Life episodes, the story unfolds with crisp, quippy dialogue and punch lines every 20-30 seconds, and then slows down for one scene in which the writers dig deeper for a more substantive conversation that brings characters out of their simple stereotypes and reminds us of why we care about them in the first place.

Unfortunately, to get to that scene you’ll have to endure several silly grandiose courtroom outbursts from Tootie. “One more word out of you and I’ll send you to traffic school!” the judge cautions, much to the relief of the audience.

Who’s That Judge?
Elliot Reid was a veteran character actor who once starred opposite Marilyn Monroe in Gentlemen Prefer Blondes, and also wrote episodes of The Love Boat and Lou Grant. Not sure what’s he’s doing slumming here.

Peter admires a beautiful harp in a pawn shop window. The shop’s owner, Mr. Zero, gives it to him, along with the knowledge on how to play it - in exchange for the deed to his soul. 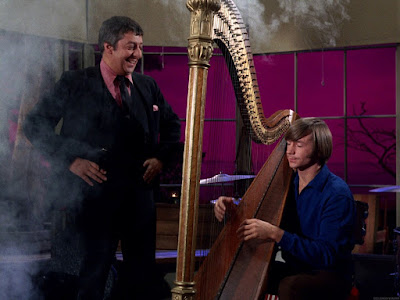 “The Devil and Peter Tork” is a fan-favorite episode from the series’ second and final season that contains some of the best dialogue in any Monkees show. By this time the quartet had stopped caring as much about the series, as they were more focused on the music once they were given creative control.  But they must have recognized something in this script that deserved their best effort. Mike’s speech at the end of the trial still resonates with anyone who loves to make music.

Billy Beck as Roy Bean, the infamous hanging judge of the Old West (though that reputation, like that of so many others within that historic era, was greatly exaggerated). Over more than 50 years Beck appeared in guest spots on dozens of shows, including The New Monkees.

Email ThisBlogThis!Share to TwitterShare to FacebookShare to Pinterest
Labels: Comfort TV Court, The Facts of Life, The Monkees