I have a friend who has collected several board games based on classic TV shows. 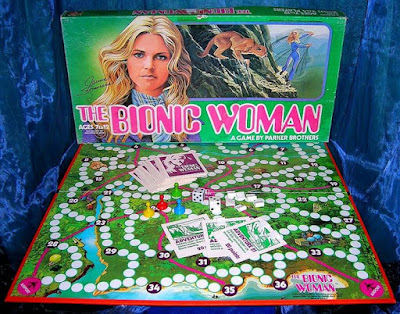 As with most collectors, he bought them for the aesthetic quality of the boxes and game board designs, and because they are colorful reminders of a fondly remembered series. Setting them up on a kitchen table and playing them was never part of the motivation.

But that’s what we started doing. For the last couple of years, every time I’d visit him he would have one set up, ready to play. 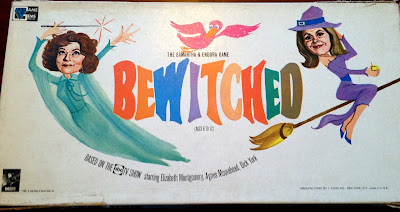 And now that we’ve tried several of them, we have both reached the same conclusion – the reason to buy these vintage games is definitely not for the hours of fun they provide. Cause there ain’t much fun to be had.

First up – the Laverne & Shirley Game. It was not a good choice. 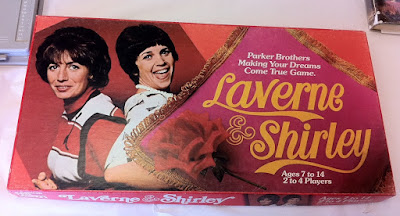 Since he provided the game, it was my task to review the instructions, which on these games are almost always printed on the inside of the box cover. I have two college degrees, and it took me an hour to decipher the rules. That might seem like an embarrassing admission, but we were two 50+ men playing a children’s game whose object is to “make all your dreams come true by collecting the most hours spent out on dates in a week.” The only thing more embarrassing is if we had followed it up with Mystery Date. 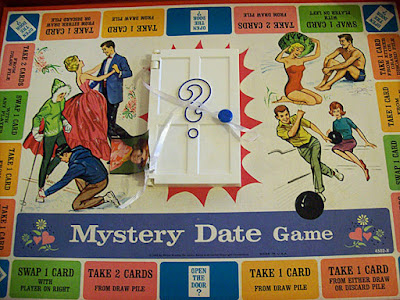 We didn’t. Instead, we set up the I Dream of Jeannie game. The visual appeal here is obvious, even if the Jeannie shown doesn’t look that much like Barbara Eden. 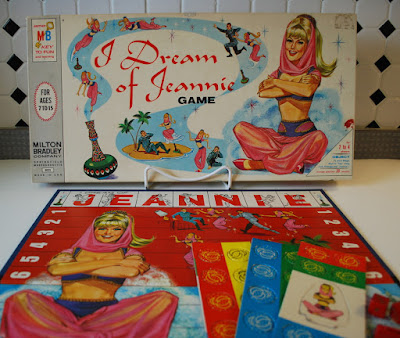 This time, at least, the game play was simple – move a set of colored disks up the board, advancing the appropriate number of rows based on each throw of the dice. The first player to have a disk on each of the letter spots at the top that spell “Jeannie” wins the game.

What’s the twist? There’s a Jeannie figure that stands in a bottle space in one corner of the board. If one of your opponents is getting close to a win, you can call out “Jeannie” and roll the dice. Any opponent pieces that are in the row that corresponds to the number on each die have to go back to the bottom and start over.  The danger is throwing a number that corresponds to where your disks are – in that case, you have to retreat as well, and Jeannie has screwed up your best-laid plans. Something that happened often to Major Nelson.

Next, Mork and Mindy. Box photo is nice, but you’d think they could have found something better. I’m not sure that’s the way Pam Dawber wanted to be immortalized. The game board design is very ‘70s, with clashing colors and mod oval shapes. The illustrations of Dawber and Robin Williams are quite good. 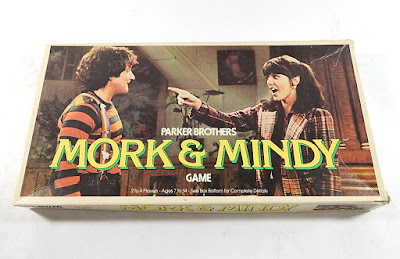 Your task here is to collect coins from Ork, Mork’s home planet. These are called grebbles, just one of many Orkan words on the board. You do this and win the game by lying to your fellow players – I’m sure parents appreciated that lesson for their kids.

How you do that is too complicated to explain here, but one facet of the game involves a landing space called Mork’s Splink Blinker, which sounds vaguely dirty. 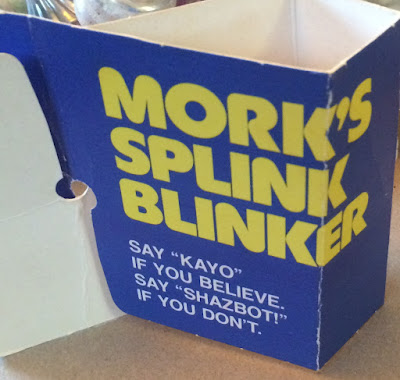 That, plus the requirement to say “Shazbot” at regular intervals, was deemed too silly to pursue. So we never got to place our grebbles in the Grebble Up row, make contact with Orson, and taste the sweet flavor of victory.

Enough of these childish sitcom games – time for a challenge more fitting for manly men. So let’s lift the lid off the box of the S.W.A.T game. I could already hear the strains of the stirring theme song as we set up the board for game play.

The object, not surprisingly, is to capture the bad guy, dubbed “the culprit.” Each player starts with a truck and two pawns that can ride inside. Movement is determined by dice roll, and special spots on the board allow players to advance faster or take a shorter path. When your pawns have reached the culprit’s hideout, you win. As does our civil society. 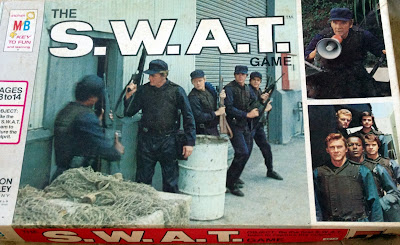 The problem with this game is that the board is so generic it could have been used for anything. Outside of a few series photos around the border, it doesn’t connect well enough to the show and its cast.

Last but not least, a game that puts the fun back into the Great Depression, featuring The Waltons. 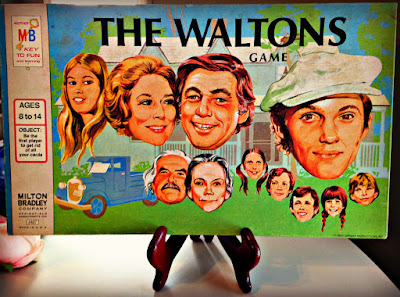 Unlike S.W.A.T, this game board is awash in series imagery. In fact, the whole point of the game is to complete scenes from the show, which have been divided into four sections in the cards that each player draws. 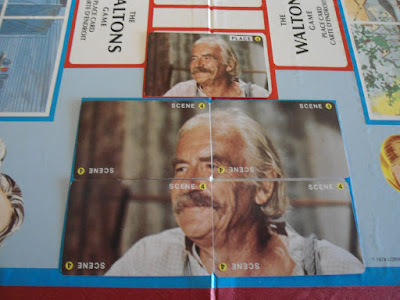 Special cards featuring John-Boy, in his jaunty cap, act like the Joker in a joker’s wild game of poker. You can drop him anywhere to secure a victory. One way this game might be more enjoyable is if you take a swig of the Baldwin sisters’ “recipe” every time you complete a picture.

As my friend acquires more of these games, I may offer additional reviews in the future. I'm still curious about what the Apple's Way game is all about, as well as shocked that the series lasted long enough to inspire a game.

Or maybe not. Based on these first attempts, I fear all of them may be about as much fun as a trip to the Splink Blinker.