Earlier this year I was offered an opportunity to write a book about The Brady Bunch. It was an intriguing prospect as this is one of my favorite Comfort TV era shows. 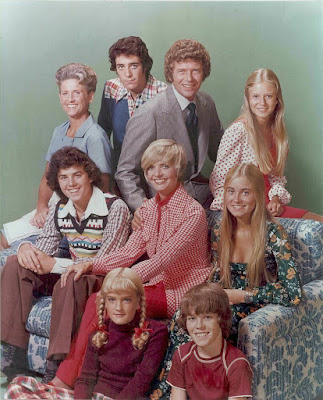 After discussing the overall direction for the book with the publisher I turned in a table of contents and a sample chapter, both of which were well-received. But for reasons that should remain private, I opted to pass before signing the contract. It was not an easy decision.

But at least I have that chapter, even without the book that would have gone with it. I'm happy to present it here.

The Adventures of Ozzie and Harriet debuted in 1952, with the real Nelson family – parents Ozzie and Harriet and sons David and Ricky – all playing themselves. Ricky formed a band on the show in 1956, and in the 1957 episode “Ricky the Drummer” he performed a cover of Fats Domino’s “I’m Walkin’”.  Domino’s original version was still in the top 40, but that didn’t stop Ricky’s rendition from reaching #4 on Billboard’s Hot 100.

Viewers watched Ricky’s performances on TV and then bought his records, and those who heard him sing on the radio would then tune into the series. That’s the kind of cross-promotional win-win that makes television network executives very happy.

Ricky Nelson had 35 top-40 hits between 1957 and 1972, including such pop classics as “Hello Mary Lou,”  “It’s Late” and “Poor Little Fool.” He set the standard by which all similar crossover attempts are measured, and was inducted into the Rock and Roll Hall of Fame in 1987.

It was perhaps not inevitable that The Brady Bunch would attempt a similar cross-promotion, but it certainly wasn’t surprising either. 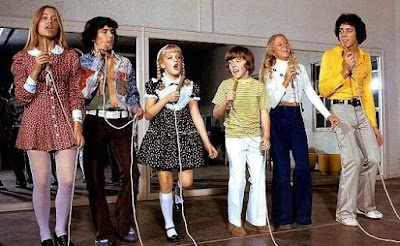 By 1969, the year the series debuted, there had been albums recorded by Shelley Fabares and Paul Petersen (The Donna Reed Show), Dwayne Hickman (The Many Loves of Dobie Gillis), Richard Chamberlain (Dr. Kildare), Johnny Crawford (The Rifleman), Patty Duke (The Patty Duke Show), Sally Field (The Flying Nun), and the casts of Bonanza, Get Smart and Hogan’s Heroes. And in 1966, The Monkees burst into television screens, radio stations and record stores, earning an Emmy Award, multiple gold records, and LP sales that, for a time, even challenged The Beatles. 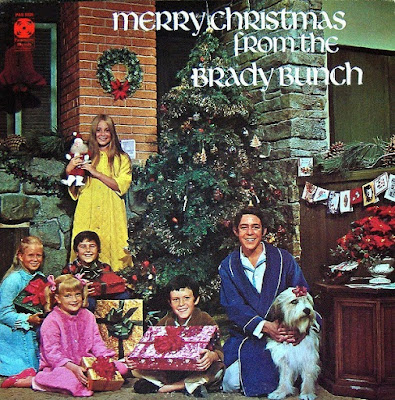 None of the tracks are especially memorable (album producer Tim O’Brien, who was also Paramount’s house producer, lamented trying to pull something listenable from “six little kids who could not sing”). And it is surprising in retrospect that Florence Henderson’s beautiful performance of “O Come All Ye Faithful,” featured in the series’ only Christmas episode, was not among the selections. Susan Olsen’s rendition of “Frosty the Snowman” was chosen as the first single. There would not be a second single.

“We finished our vocals in one afternoon, and then listened intently as the audio engineers used every gimmick, trick and echo chamber in the book to get us at least up to ‘listenable’ status,” recalled Barry Williams.

The season two episode “Where There’s Smoke” introduces Greg’s interest in music; he joins a band with three high school classmates, plays the guitar and sings “’Till I Met You,” a ballad he co-wrote with Sherwood Schwartz and Lloyd Schwartz. The song would not appear on any of the four Brady Bunch albums, an early portent of the lack of communication sometimes evident between those responsible for the series, and the team overseeing the group’s recordings. 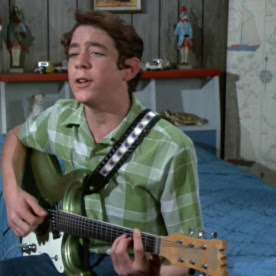 The series’ first fully music-themed episode, titled “Dough Re Mi,” aired during its third season. The plot has Greg writing a “sure fire hit song” called “We Can Make the World a Whole Lot Brighter.” The kids pool their allowance money, plus a loan from their parents, to rent a recording studio and cut a record. But just before the session, Peter’s voice changes and won’t stop cracking. Disaster is averted when an inspired Greg writes another song, “Time to Change,” that turns Peter’s vocal struggles into an asset. 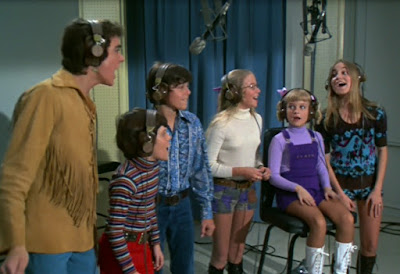 Both songs were released as a double-sided single, and appear on the second Brady Bunch album “Meet the Brady Bunch,” released in July of 1972. It would be their only LP to chart, reaching #108 on July 22, 1972. Other original tracks included “We’ll Always Be Friends” and “I Believe in You,” written by Jackie Mills and Danny Janssen. Mills, who previously worked with Bobby Sherman and Davy Jones, also produced the album. Janssen had contributed songs to two other TV bands, the Partridge Family and Josie & The Pussycats.

The album showcases what became the Brady Bunch sound – wholesome bubblegum pop with an optimistic message, delivered in sunny (if still occasionally shaky) group harmonies. Perhaps more interesting are the selection of covers, from Bread’s “Baby I’m-A Want You” and Lobo’s “Me and You and a Dog Named Boo” to a version of Don McLean’s “American Pie” described by Barry Williams as “extraordinarily awful”. 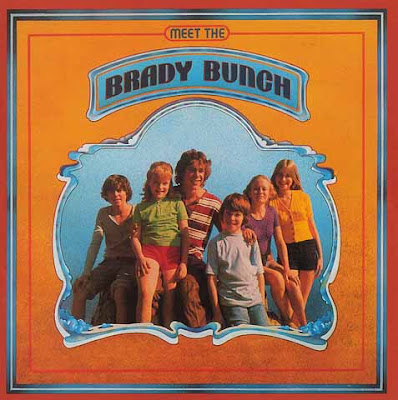 “Dough Re Mi” would be the only episode featuring music from the series’ third season, once again suggesting that the studio’s interest in launching its cast to pop stardom was indifferent. “The Brady Bunch was not a series about a singing group of kids,” said Lloyd Schwartz. As a result, minimal effort was put into leveraging the cast’s popularity for the kind of crossover success chased by previous singing TV stars. Promotion for “Meet the Brady Bunch” was limited to a handful of cast signings at Southern California’s White Front discount stores.

Season four’s “Amateur Night” was the most celebrated and the most successful of the show’s musical episodes. The kids purchase a silver platter for their parents’ anniversary, but Jan miscalculates the cost of the engraving, leaving them $56.23 short. In desperation, they attempt to raise the money by performing on a TV talent contest.

It is Jan who suggests the possibility (“We can sing a little and dance a little”), which is met with incredulity by her siblings, despite the group having aspirations of recording a hit record the previous season.

The performance of “It’s a Sunshine Day” in this episode is as famous a moment as the series produced. The song, written by Stephen R. McCarthy, has become an indelible moment from 1970s pop culture. In the years since it has been featured in episodes of Family Guy and Castle, in commercials for the Playstation video game console and the Amazon subsidiary Audible, and it provided the title for a 1993 CD collection of Brady songs.

Both “It’s a Sunshine Day” and “Keep On” (the second song performed in “Amateur Night”) appear on “The Kids From the Brady Bunch,” released in late 1972. Jackie Mills returned as producer. Once again the formula was mixing upbeat pop originals with famous covers such as The Beatles’ “Love Me Do” and Chicago’s “Saturday In the Park.”

Several of the tracks on this and the previous album were also heard in the Filmation animated series The Brady Kids (1972-1973). Each of its 22 episodes contains a musical sequence depicting the six Brady siblings as a band – Greg, Peter and Cindy on guitars, Jan on keyboards, Marcia on tambourine and Bobby on drums. These sequences, with their psychedelic backgrounds, were copied almost directly from similar scenes in 1960s cartoons featuring The Archies, also produced by Filmation. 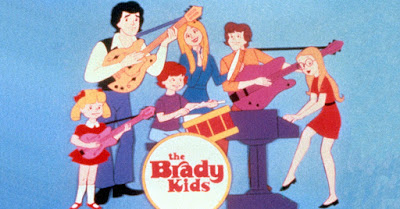 From 1973, “The Brady Bunch Phonographic Album” was the fourth and final group recording. That same year, the series opened its final season with “Adios Johnny Bravo,” which once again has the six siblings auditioning for a television appearance. By now any viewers seeking continuity in these occasional performances had to wonder if the kids viewed singing as a hobby, a way to supplement their allowances, or whether they were serious about pursuing a career in music. Certainly that seems to be the case with Greg in this episode – at one point he is prepared to forego college, much to his parents’ dismay, to chase stardom. 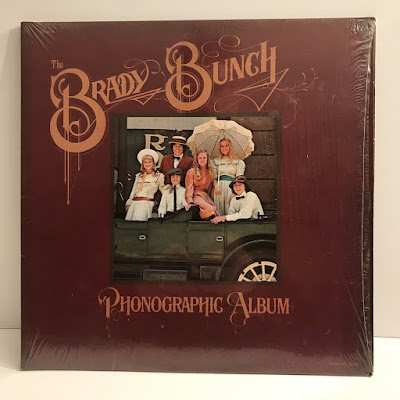 The group performs two songs in this episode, “You’ve Got to Be in Love to Love a Love Song” and “Good Time Music,” both of which were never released.

By this time, however, the six young stars had developed musical aspirations on their own. They hired veteran Las Vegas producers Ray Reese and Joe Seiter to help them develop a live act, and began rehearsing for a concert tour. All without the knowledge or consent of Sherwood Schwartz. Performances were scheduled during the summer when the series was on hiatus.

“When we found out about it, Dad could have stopped it or at least he could have taken a share of the money since the six kids didn’t have the legal right or permission to call themselves The Brady Bunch, or The Brady Kids,” Lloyd Schwartz said. “But he thought if they wanted to make some money, it was not right for him to stand in their way.”

The group performed in arenas and at state fairs, drawing audiences of more than 10,000. The adulation they received was not inspired by exceptional performances, though by this time both Barry Williams and Maureen McCormick had become more than adequate vocalists. It was triggered by fans thrilled at the opportunity to see in person the characters they had embraced every Friday night on ABC. To their contemporaries the Bradys were brothers, sisters, friends, crushes. And in an era before Facebook and Twitter television stars were not as accessible or as overexposed as celebrities are now. 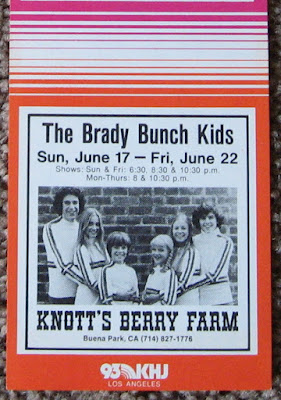 Emboldened by the audience response, and at the urging of some of their parents, the group hired an agent and appeared en masse in Sherwood Schwartz’s office with a list of demands, one of which was that seven of every 13 new Brady episodes include a musical performance. Unfortunately (though perhaps thankfully), the series was canceled before the issue could be resolved. Christopher Knight, who never enjoyed singing or touring, then quit the group, also putting an end to future recordings or tours.

Ironically, while music may have hastened the cancellation of the series, it was also the impetus for the first of many revivals just two years later, with the debut of The Brady Bunch Variety Hour.

It’s hard to quantify the role music plays in the enduring popularity of The Brady Bunch, given how it manifested in fits and starts throughout the run of the original series. Many fans would rank musical episodes like “Amateur Night” and “Adios Johnny Bravo” among their favorites, and the songs from those shows would be showcased in delightful scenes from The Brady Bunch Movie and A Very Brady Sequel, fortifying their place in the series’ legacy.

Other endeavors – a 1971 single called “The Fortune Cookie Song” by Eve Plumb, the 1974 single “Love Doesn’t Care Who’s In It” by Mike Lookinland, a 1973 album from Christopher Knight and Maureen McCormick, went virtually unnoticed then and are forgotten now.

It was, in the end, as much about merchandising as music, if not moreso. Albums were churned out as one more purchase option for viewers along with lunchboxes, trading cards and Kitty Carryall dolls. The songs themselves are little more than a footnote in the Brady story, albeit one fondly remembered by fans 50 years later.
Posted by David Hofstede at 3:16 PM

Email ThisBlogThis!Share to TwitterShare to FacebookShare to Pinterest
Labels: The Brady Bunch