How Hogan’s Heroes Should Have Ended

We’ve talked before about how some Comfort TV shows ended with an episode that provided closure for its characters and its viewers. But these were the exception.

From the 1950s through the 1970s, most series just stopped. Of these, the one that still bothers me most is Hogan’s Heroes. It doesn’t take decades of hindsight to wonder why we were not shown how the end of Germany’s involvement in World War II played out at Stalag 13.

Was the creative team caught off-guard? Hardly. According to Brenda Scott Royce’s fine book on the series, everyone knew the show’s sixth season would be its last. 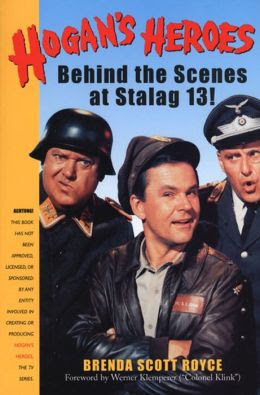 There was an eagerness to get the series into syndication, which offered higher profit potential, and a time-slot change had further cut into already sagging ratings.

Besides, this was something that should have been prepared for years earlier. Hogan’s Heroes had a small stable of regular writers, including Laurence Marks (68 episodes), Richard M. Powell (29 episodes) and Arthur Julian (24 episodes). It’s inconceivable to me that at least one of them never came forward to say, “Hey, I know how we wrap this up.”

The only plausible reason it didn’t happen was a concern over how a finale would impact the series in syndication. This was also an issue with The Fugitive, as producer Quinn Martin worried no one would watch the reruns because they knew how the show ended. And perhaps that concern was warranted, as The Fugitive rarely aired in syndication, while Hogan’s Heroes played for the next 20 years.

Very different shows, of course, and had Hogan’s shot a final episode I can’t imagine it would have diminished the show’s enduring appeal.

How would it unfold? Here’s my version.

In the opening scene, a message is sent from London to the heroes’ underground radio: Hitler has killed himself and Germany has surrendered. Hogan would make the announcement to LeBeau, Newkirk, Carter and Baker (Ivan Dixon, who played Kinchloe, did not return for season six). There would be much joy and celebration, and a discussion about what they all planned to do now that their treacherous assignment has ended. 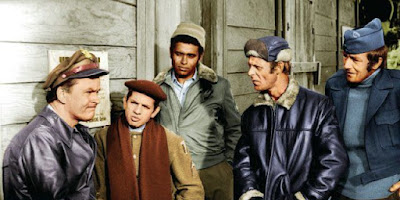 And unlike the show’s creative team, this is a moment Hogan will have anticipated. Sure, he’ll say, now we could wait for the Allies or walk out the front gate, but it seems more fitting to make a final exit from Stalag 13 through the tunnels, disappearing for the last time into the German countryside.

But before departing, they’d ask for a word with Sgt. Schultz. 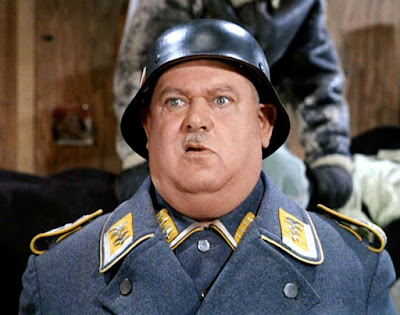 How many rescues and sabotage plans would not have been possible without Schultz’s preference to not know what was going on? Some of my favorite scenes in the series had Hogan not just planning his strategies in Schultz’s presence, but offering to explain them in detail, until the agitated Schultz fled the scene after yet another declaration of his famous catchphrase: “I know nothing! I see nothing!”

Hogan would be content to leave true believers like General Burkhalter and Major Hochstetter to their fates. Particularly Hochstetter, the Gestapo leader who was as nasty a piece of work as the show could introduce in a comedic premise. 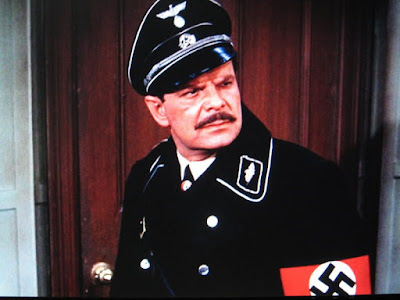 But Schultz never wanted to be a Nazi. As revealed in the episode “War Takes a Holiday,” before the war he had been the owner of the Schatzi Toy Company. And while he had plenty of stomach he certainly had no stomach for war, or the despicable agenda of his Führer. So Hogan would offer him and his family safe passage to London or America. Or, if he preferred to stay, they would use some of their appropriated funds to set him back up in the business he left after being drafted.

Great sitcoms can handle serious moments, and here would be an ideal opportunity to reveal what was obvious to attentive viewers all along: Schultz was never as dumb or as innocent as he presented himself. A clueless clown couldn’t build the largest toy maker in Germany. He was making the best of a terrible situation, trying to stay alive and away from the Russian front.

“I knew everything,” he would tell Hogan as they parted company. “I saw everything. I just did nothing because I knew you were right.”

But what of Colonel Klink, whose ineptitude was even more decisive is securing an Allied victory? 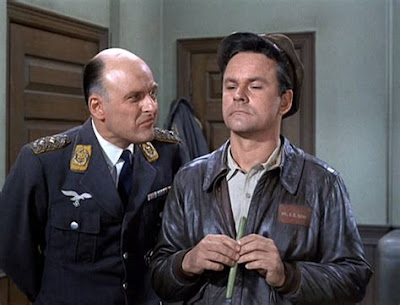 The easy option would have Hogan making one last unannounced visit to his office, with a “guess what we’ve been doing all this time?” revelation. But that seems too obvious.

There could be an ironic twist of Klink finally making General – having one of the most unqualified German officers in the military not only surviving but advancing despite his incompetence – sort of like how The Mary Tyler Moore Show ended with Ted Baxter as the only WJM News employee who wasn’t fired.

But I’ve always imagined something more poignant so Werner Klemperer, who won multiple Emmys for his portrayal of Klink, could also play a moment revealing the man beneath the buffoon.

Klink calls Hogan to his office to share a glass of champagne and toast the end of the war, but by then Hogan and company are already gone. But before they leave, they expose every aspect of their operation, which is finally discovered by the clueless commandant.

We watch as Klink walks silently through the now-abandoned camp, its tunnels laid bare, along with the maps and the coffee pot listening device, the stockpile of German uniforms, the printing press, the sliding barbed-wire fence and the hinged doghouse.

As he realizes what a fool he’s been all this time, an overhead crane shot would pull out from Klink standing alone with this thoughts. Gradually his incredulity turns to a smile, and perhaps even a laugh, as he enters Hogan’s quarters and offers an acquiescent salute to a superior adversary. We then cut to Hogan and company in Paris – joined by Marya and Tiger and maybe even Colonel Crittendon.

The episode would conclude in Washington DC, with Hogan and his men in dress uniforms receiving medals for their efforts in helping to win the war, as the stirring strains of Jerry Fielding’s march emanate from a military band.


What do you think? Love it? Hate it? Think you could do better? You probably could. But if you’re not impressed I’m happy to direct you to yet another version, created a few years back by Mitchell Hadley at the It’s About TV blog. He plays the story out into the Korean conflict, the Kennedy administration, and up to the 1980s. He was always more ambitious than I am.