I love the music of The Monkees. Always have. 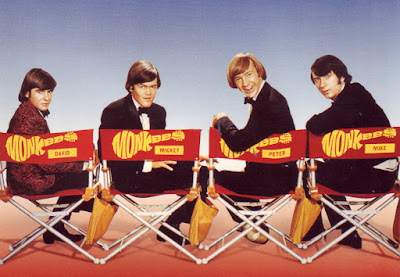 I was too young for the series’ 1966-1968 prime time run, but when that ended The Monkees was moved to syndication on Saturday mornings, an unusual but effective programming strategy. That’s when I discovered them, right alongside Josie and the Pussycats and Kaptain Kool and the Kongs.

The songs were my favorite part of the show, and back then that was the only place where you could hear them. This was the early 1970s, when the original Monkees albums were out of print, and radio (even oldies stations) never played them because they were not a “real band.” Only dopes like Jann Wenner still hold that opinion.

Since my generation of Saturday morning Monkee fans couldn’t buy the records, and iTunes was still about 30 years away, we improvised by holding the microphones from our portable cassette tape players up to our TV speakers, and making our own Monkees tapes.

Given the generally poor state of my short-term and long-term memory, it’s surprising that I still remember being in the record department at Sears in 1972 and seeing something I had never seen before – an actual Monkees album. 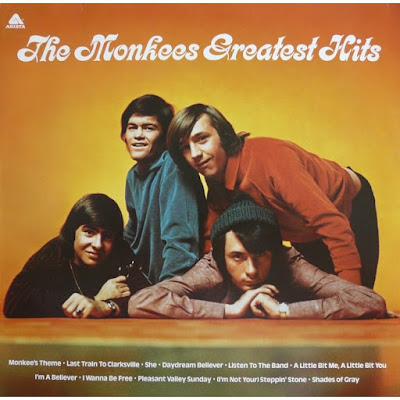 Sometime after that I picked up this import gem from Australia with 40 songs, plus amazing liner notes that told the full story of the band. 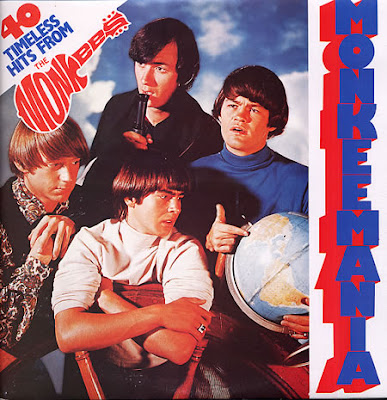 It took MTV to finally reignite Monkee-mania with an episode marathon that aired on February 23, 1986. Its reception prompted a reunion tour (yes, I did get to see them live, and it was awesome even with out Mike Nesmith) and the re-release of all the band’s original albums, as well as the new top 20 hit “That was Then, This is Now.”

Today the reputation of The Monkees has been mostly restored, though they remain a glaring omission from the Rock and Roll Hall of Fame.

These are my 20 favorite Monkees songs, in no particular order – along with 5 I’d rather forget.

I’m a Believer
This is not only one of the band’s most popular and successful songs (seven weeks at #1!), I think it belongs in the select company of the most perfect pop records ever made, alongside The Ronettes’ “Be My Baby” and “California Girls” by The Beach Boys.

Last Train to Clarksville
It was about a soldier leaving for Vietnam, as most fans know by now. It’s fascinating to me that the first single from this manufactured band of TV goofballs not only tackled such a serious subject, but was also climbing the charts before the series even debuted. Personally I think “Clarksville” is slightly (just slightly!) overrated, but it was their first #1 hit and deserves to be here.

Mary, Mary
Given the master plan behind The Monkees machine it’s doubtful that Mike Nesmith’s songwriting played any role in his casting, but it became an essential element in the band’s evolution. That’s Glen Campbell playing the distinctive lead guitar riff on “Mary, Mary,” a song also covered by the Paul Butterfield Blues Band and Run DMC.

Look Out (Here Comes Tomorrow)
I think this is their best pure bubblegum track. Those familiar with Monkees history know that original music producer Don Kirshner exerted dictatorial control over the band’s first two albums. Had Davy, Micky, Peter and Mike been the bystanders to their own careers that some critics alleged, all Monkees songs might have sounded like “Look Out (Here Comes Tomorrow).” Thankfully, sweets like this form only one part of their diverse catalog.

Shades of Gray
The Monkees’ third album, Headquarters, was the first that gave the quartet control over their musical output. It produced no singles in the U.S., but this plaintive ballad would have been a worthy choice.

Daydream Believer
Another obvious pick, another #1 hit, and featuring Davy’s best vocal on a Monkees track (though if you prefer “She Hangs Out” I won’t argue the point). How many other bands could boast three lead singers as distinctive and as good as Davy, Micky and Mike?

Randy Scouse Git
This is a Micky Dolenz composition that was a huge hit in England and throughout Europe, but it tanked in America. According to Dolenz, it was written the morning after a London party for The Monkees hosted by another popular quartet called The Beatles.

Papa Gene’s Blues
“I have no more than I did before…but now I’ve got all that I need…for I love you and I know you love me.” Mike brought a country-folk flavor to the group both as a singer and songwriter. This is one of his first Monkees contributions, and one of his best.

I’m Not Your Steppin’ Stone
From “More of the Monkees,” this is the only Monkees song covered by the Sex Pistols – assuming there’s not a bootleg somewhere of Johnny Rotten singing “Valleri.” Micky’s delivery is not quite as aggressive, but there’s a lot more snarl in this track than anything else on the album.

Early Morning Blues and Greens
This “Headquarters” track is an acquired taste, as it lacks the irresistible hooks found in the band’s best-known songs. I find it reminiscent of Crosby, Stills and Nash, and it’s become a song I like more every time I hear it.

A Little Bit Me, A Little Bit You
Neil Diamond, who wrote “I’m a Believer,” also penned this memorable single, which just missed becoming their third consecutive #1 hit. It stalled at #2 for two weeks, behind The Turtles’ “Happy Together.”

The Girl I Knew Somewhere
History tells us this is the first fully self-contained Monkees song. Mike wrote it, and the group played the instruments and performed all the vocals. Peter Tork plays a mean harpsichord on this top-40 classic.

The Door Into Summer
The “Pisces, Aquarius, Capricorn and Jones Ltd.” album (1967) came closest to earning The Monkees some critical praise during their first go-round. Tracks like this one are a reason why.

What Am I Doing Hanging Round?
Mike showing his Texas roots again, on a track that has all the twangy qualities of one of his own compositions. However, this one was actually written by Michael Martin Murphy, later of “Wildfire” fame. As much as fans wanted then and now for the band to be taken seriously, it’s admirable how they rarely took themselves seriously, as evidenced by Micky hamming it up in the video for this song.

Words
I know “Pleasant Valley Sunday” was a hit, and I do like it, but if I’m being honest I prefer the song on the flip side of the single, which was written by The Monkees’ most prolific go-to songwriters, Tommy Boyce and Bobby Hart. It’s also a nice reminder that Peter could sing too, when he wasn’t goofing around on novelty tracks like “Your Auntie Grizelda.”

Sometime in the Morning
The brilliant songwriting team of Gerry Goffin and Carole King contributed several songs to the Monkees’ music catalog – this tender ballad is my favorite, perhaps because they sang it to Rose Marie in the episode “Monkee Mother.”

Ríu Chíu
Ríu Chíu is a Spanish Christmas carol that dates back to the 1500s. The Monkees a cappella version (performed on “The Christmas Show”) is mesmerizing in its beauty.

Aunties Municipal Court
By now you may have sensed that I am partial to Mike Nesmith compositions. Here's another one, but there’s not much Nashville to be found in the psychedelic arrangement and evocative beat poetry lyrics of “Aunties Municipal Court.” If you’re into great bass riffs, this has one worthy of McCartney.

For Pete’s Sake
This is The Monkees’ “summer of love” song, not surprisingly co-written by the Monkee that most embraced the counterculture and peace and love movements of the era, Peter Tork. It was played over the closing credits of every episode in the series’ second and final season.

Nine Times Blue
There are versions of this Mike Nesmith song with Mike singing lead and Davy singing lead. I prefer the first one, though it’s interesting to compare the interpretations.

Gonna Buy Me a Dog
Three minutes of Micky and Davy ad libbing and telling bad jokes. Fun if you’re in the right mood, but it’s hard to believe this earned a spot on their debut album while better songs like “All the King’s Men” didn’t make the cut.

Mommy and Daddy
It’s a toss-up between this song and “Zor and Zam” for the title of Micky’s most awkward stab at social commentary.

Can You Dig It
The movie Head had some memorable music moments, particularly “Circle Sky” and “The Porpoise Song,” but this was not one of them.

P.O. Box 9847
Proof that even Boyce and Hart could have an off day.

99 Pounds
The last original Monkees album was “Changes,” released in 1970. By then only Micky and Davy remained, but even with half a group the album isn’t all bad – sample “Ticket on a Ferry Ride” and “I Love You Better” if you’re curious. But on “99 Pounds,” Davy Jones tries to be Little Richard, and falls short. But then, Little Richard couldn’t do justice to “Forget That Girl” either.

Posted by David Hofstede at 9:57 AM
Email ThisBlogThis!Share to TwitterShare to FacebookShare to Pinterest
Labels: The Monkees